The future of bird scaring is smart.

Traditional methods have become outdated and no longer have the same impact. Instead, we make use of cutting edge, Internet of Things (IoT) technology to help businesses maintain bird-free environments in cost-effective & flexible ways.

As Seen In Pest Control Technology

Although birds can be beautiful to look at, they often cause significant damage to buildings and put the health and wellbeing of the public at risk. A birds appetite, faeces and noisy behaviour can result in considerable financial losses. Bird proofing measures, like BirdAlert, are therefore needed to put your mind at ease, as well as to keep you legally compliant.

Traditional proofing methods and bird scarers often have a limited effect, usually caused by habituation. Birds quickly become accustomed to the equipment used as they typically rely on timers. Within a week or two, these traditional scaring methods often lose their desired effect. Unless you’re regularly moving them around the problem area, they will eventually become completely redundant.

Here’s where BirdAlert comes in.

BirdAlert has been developed explicitly to meet this challenge. Combining modern IoT technology with time tested bird-scaring practices to ensure habituation is avoided.

BirdAlert is an innovative bird control system that monitors your site 24/7 using an advanced microphone. As a bird reaches the area, BirdAlert identifies the species by analysing their calls – think of it as a unique acoustic fingerprint.

When a specific nuisance bird is identified in the area – it activates one of five input options. Built-in distress calls ring out using the recommended speakers which scare the birds away. The BirdAlert system then analyses if the sought out effect is achieved, and if not, it reactivates.

BirdAlert is placed in the wanted area and monitored through an online portal. The box will detect when the chosen birds are within a radius of up to 250 meters. BirdAlert is equipped with five sockets, allowing the customer to connect different scare tools, including the recommended speakers, as well as a gas cannon, kite controller, eagle eye and scareman.

BirdAlert is carefully sealed and out of consideration to humidity, insurance, and lifetime should never be opened. Furthermore, the innovative technology is continuously updated with new software to retain the effectiveness of the system. Ensuring it maintains its effect and scares birds away week after week, year after year.

BirdAlert comes equipped with an online portal, which acts as a single point to monitor the effectiveness of your investment. Your online portal observes what happens when you’re not around. See how many times BirdAlert has activated and which species have been scared. No need for manual adjustments, once BirdAlert is set up; everything is done through the online portal. Truly digital bird control! 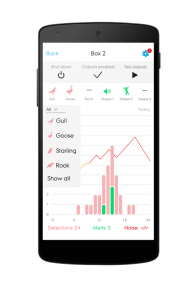 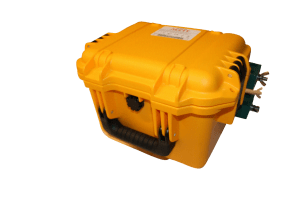 BirdAlert can help with the following birds

BirdAlert has proven to be an effective scarer for a large number of birds, including pigeons and seagulls. Birds such as Gulls can be boisterous and can cause considerable damage to corporate buildings. Geese are known to cause problems in fields due to the number of crops they eat. Starlings come in large flocks and settle in stables, pastures and fruit plantations where they eat as much as they want, Rooks gather in large colonies and cause an inconvenience due to noise, bird droppings and their immense appetite.

These problems can all be solved by implementing a BirdAlert box at your site. Feel free to talk to our team for a free consultation, or to discuss the bird species causing you problems.

We are bird control experts. Take a look at the other methods we offer, including bird spikes, netting, post and wire and many more.

Learn more about the different input options that are available with this cutting edge technology.

We're pigeon proofing solar panels experts, and we care about your health and wellbeing at home.

All quotes are free of charge and come with no obligation to proceed, regardless of the issue being surveyed.

Don't worry, you're not the first to test out our fantastic bird-scaring product. We've already implemented BirdAlert at Airports, Recycling Plants, Corporate buildings and more.

Feel free to check out Google, Trustpilot, Checkatrade, Facebook and Bark. You'll find excellent reviews that'll give you the confidence that you are dealing with the experts you want.

We love the fact that we're members of Checkatrade, CHAS, BPCA, and CEPA. We also hold the ISO 9001:2015 accreditation, which demonstrates that we have a high level of quality management in place to support the business and its client base.

How to get rid of pigeons?

How to get rid of seagulls?

Advice and guidance on how to get rid of seagulls